As a long-time fan of one of the greatest rock bands ‘Talking Heads’, it’s good to see that the members of the band are still working hard in the music business in spite of their breakup. Band’s ex-frontman David Byrne released a new single ‘Who’ with the help of a famous female artist ‘St. Vincent’, and Tom Tom Club, a kind of side project of Talking Heads and whose members are Chris Frantz and Tina Weymouth, started to sell their new EP ‘Downtown Rockers’ online. What really amazed me is that the songs of David Byrne and Tom Tom Club are not just old-fashioned songs that appeal to ’80s rock-n-roll fans and they are rather contemporary and state-of-art. This is partly because they are great musicians and so have kept up with the pop music trends, and partly because current music styles, such as danceable funky beats and exotic melodies, are based upon the great funky new wave band ‘Talking Heads’. That’s why they are not falling behind younger musicians. One of my favorite singes in ‘Downtown Rockers’ so far is ‘Sweets to the sweet’, which has a sophisticated but catchy melody.

It’s often said that a drummer and bass player have to be “married” to form a great rhythm section. But you and Chris actually are husband and wife! [Tina laughs] Does either one lead?

“The drums always lead. The drums work the band. A bass player follows the drummer – always. It doesn’t matter what band you’re in. You can’t do it any other way. I mean, Tricky tries to do it a different way, but Tricky’s Tricky. He is exactly what he says he is – he doesn’t do music, he does image. 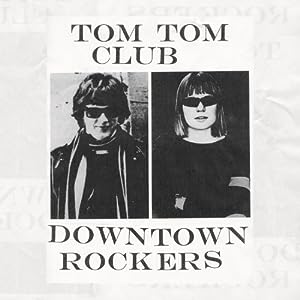 The duo, husband and wife Chris Frantz and Tina Weymouth, announced the new mini-effort through their Facebook page, but didn’t quite deliver all of the details. They did, however, confirm that the recording will arrive September 4 digitally, and be issued on vinyl on September 11. That’s potentially it’s artwork up above.[원문보기]

As with the Tom Tom Club’s previous five projects, a rotating cast of musicians are featured. Frantz and Weymouth told Billboard.com that the EP will include a remake of “Love Tape” by the Pinker Tones, the Spanish electronica group. “It’s been very exciting,” Frantz said. “We recorded it with the touring band we have, and it sounds really great.”(더 자세한 소식 보기)